It is an artificial site that connects the northern Mayans to the Mayans of Central America.

Thanks to this, they established a great commercial exchange, through which, the main products were foodstuffs, exotic bird feathers and of course, precious woods, which were the great wealth of the area for many centuries.

Later, during the colony, this was called Canal de Salamanca, which served as a point of connection between Europe and America, being the focus of attention for famous pirates and corsairs, among which Henry Morgan (1635 - 1688), Francis Drake (1543). - 1596), among others, who took advantage of this commercial point to exploit the wooden wealth for the repair of their boats and constructions of new ships.

Currently, this is an almost mandatory visit point in Bacalar, due to its beauty and also because of its high content of minerals, ideal to exfoliate the skin. 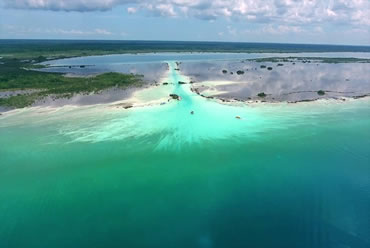