The original name of the city is unknown. A researcher, Alberto Escalona Ramos, named the site Oxtankah in 1937. The place name may have three interpretations: “between three peoples”, “three neighborhoods” or “place surrounded by Ramon trees.”The Ramon is a tree (Brosium alicastrum) that flowers in summer.

The archaeological site may be reached by taking the Chetumal-Calderitas highway. When you reach the town, continue on the paved highway that borders the bay; 3 miles to the north, you will see signs to indicate the entrance to the site. The total distance from downtown Chetumal takes approximately 25 minutes.

History of the Site

It is the largest and most important pre-Hispanic city that has been discovered in the Chetumal Bay.The first groups of Maya settled in Oxtankah around 600 BC, remaining there until 1100 AD. Within this timeframe, there were three periods of high population density: Late Preclassic (300-50 BC) Early Classic (250-600 AD) and Late and Terminal Classic (600-900 AD). The peak of its sociopolitical system was reached during the Early Classic period, when the ruling groups at Oxtankah served as governors of nearby towns. Their power is reflected by the architecture.During this epoch, various buildings were extended, notably doubling their original proportions; the city even extended beyond the coast to include Tamalcab Island.The core area of the settlement included at least ten plazas and two sunken courtyards bordered by buildings, more than thirty isolated structures, and one cenote. The main architectural design of the Petén-style structures included overlapping bodies with sloping walls, with rounded and tucked corners, whose essential element is the “apron” molding. To supply themselves with fresh water, they built wells and chultunes, where they captured rainwater. Navigation was a common activity, so they traveled the region’s canals in canoes and crossed the Chetumal Bay to traverse the Caribbean sea from north to south. This allowed them to contact other coastal communities and participate in exchange systems over long distances to obtain maritime and foreign products that they would then distribute to other inland community settlements. When the Spaniards arrived, Oxtankah had already been abandoned for 400 years. 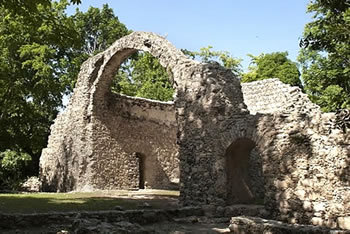